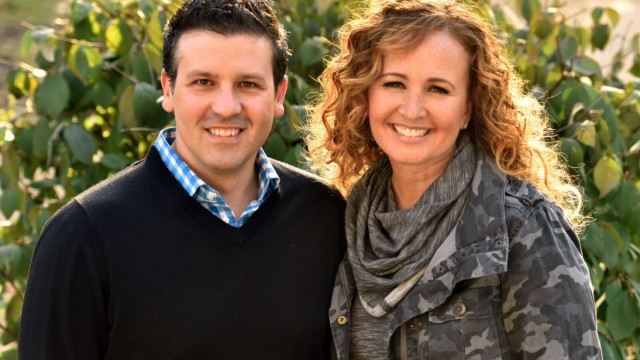 Describing a difficult time in their twenty-year marriage, Nick and Rachel Klein say their relationship was “like a bridge with cracks in it.”

“But until a big truck drives over it,” Rachel says, “you don’t always see the cracks.”

For the Kleins, the truck that exposed the fractures in their marriage was the stress of infertility, followed by the arrival of not one but two premature babies through in vitro fertilization (IVF).

When Nick and Rachel started dating in their late teens, God was already laying plans to bring them into a relationship with Him, in spite of some real struggles.

Having lost his mom when he was four, and his dad at age eighteen, Nick found himself with nowhere to live when, after his dad’s death, his stepmother asked him to leave the family’s home. Moving in with his girlfriend, Rachel, felt like his best option.

Rachel had grown up with some religious influence in her life and knew enough of the dos and don’ts of the Catholic Church to feel a little uneasy about the arrangement. “I had no real faith,” she says, but Christian friends were witnessing to her and regularly inviting her to church.

“Neither of us realized it at the time, but God was working on both of us,” Nick says, “but Rachel was struggling more than I was with the idea of living together.” Willing to help Rachel address her concerns, the couple decided to seek counsel from a priest, but the appointments never seemed to happen.

Meanwhile, Rachel’s friends continued to tell her about Jesus, one evening inviting her and Nick over to talk with their pastor and learn more of what Christianity was all about. They were interested in what he had to say and had a good conversation, but neither was ready to respond.

But God was also working in Nick’s heart. One day he told Rachel, “I’ve been thinking a lot, and I have decided that if being with you for eternity means that I can’t be with you here and now, then that’s what it has to be.”

“That was the moment when we knew we had to be apart, physically apart. But Nick had nowhere to go. He ended up living in my parents’ basement,” Rachel says with a smile.

“A few months later—when we were both living for Christ and making Him our top priority—Nick proposed to me.”

With the help of a local church, and a pastor who wisely advised the young couple, Rachel and Nick built a good marriage and lived happily together for the next ten years.

Over time, however, a dark cloud—issues related to infertility—began to hang over their lives.

They had been trying to start a family for a number of years, but it wasn’t happening. Nick took that as a sign that maybe they weren’t supposed to have kids. They had a beautiful marriage, hobbies each of them enjoyed, the ability to travel, and successful careers to make it all possible. Maybe God didn’t want them to be parents.

But Rachel, longing to have children in their home, had a very different opinion.

So they waited, each dealing with the stresses and uncertainty of infertility for eight years. Eventually they agreed to try IVF, a process that produced additional strain in their once easy-going relationship.

Fortunately, it wasn’t long before Rachel was pregnant, and after fourteen years of marriage, Nick and Rachel, now both in their late thirties, were the parents of fraternal twins.

“We were blessed,” she says, “and obviously those two little kids—one boy and one girl—were very much wanted. But the first couple of years of their lives were probably the hardest of our marriage—one reason being the reality of going from zero to two kids just like that. We had also been very independent people, but now we had to work together and depend on each other.

“We were in a bad place, and we didn’t know how to get past that,” she adds. “I often say that we were like two boxers on opposite sides of a ring. When big decisions came up, we were battling each other over what we should do. Nick would feel really strongly one way, and I’d feel just as strongly another way. Somehow we needed to find a way to be on the same side.”

They were stuck, and no one seemed to know how to help. By that time, Nick and Rachel had leadership roles in their church, but the church was struggling as well and unable to help them with their relationship struggles.

“We had this big boulder right in the middle of our relationship, and I told one of the pastors, ‘We see the need for leadership help in our church, but we can’t see past the huge boulder in our own living room,’” Nick says. “We were about to fall apart.”

Then some friends who had faced serious relationship struggles in the past and had been helped by a Wheaton Bible Church pastor invited them to visit. So Nick and Rachel started attending on Sundays.

At that point, the couple who once would have rated their marriage a solid “9 out of 10” viewed their once-strong relationship as “maybe a 3 or a 4.”

“We had reached the point,” Rachel says, “where I didn’t know if we were going to make it.”

Then one Sunday they saw a flyer for re|engage, a program that is part of WBC’s marriage ministry, and decided they should try it. And while some couples attend for several weeks or longer before committing to joining a group for the sixteen-week curriculum, Nick and Rachel walked in the door ready to do whatever it took to bring healing to their marriage.

“We were completely ready,” Rachel says. “I mean, we were so spent—like people in a desert who are parched and needing water—and we said, ‘Bring it on! We don’t care what group we’re in. We’ve just got to get into this as soon as possible.’”

Ready to do Battle

“What resonated with me right away,” Nick said, “was that you could tell there were people in the group who were hurting like we were, and they wanted to share right out of the gate: ‘Here’s what we’re dealing with.’ People were real, and they were truthful and honest.

“It was so refreshing, because we saw right away that we weren’t the only ones dealing with stuff. But sometimes it was raw. You don’t typically have conversations with other people you haven’t known for very long and say, ‘Hey, our marriage is not doing that great.’ People—even family—will avoid those types of conversations. And here, right from the start, people are saying, ‘It’s bad. But we want to fix it.’”

Nick is quick to add that some people don’t talk for a while. For a few of the couples, several months passed before they were ready to share anything specific.

“And you don’t have to talk in order for re|engage to help you,” he said. “But the fact is, when you’re ready to share, it’s a safe place.”

For Rachel, being part of re|engage was a whole new kind of experience.

“We’ve done a lot of marriage Bible studies over the years,” she says, “where you talk about theories and principles of good marriages, but this isn’t like that. This really is a place for healing—a place to be real and open—a lot more than just studying the principles of marriage.”

What Nick and Rachel learned at re|engage, they say, changed their conversation and their attitude about their marriage.

“One of the most valuable lessons for us was one that helps you draw a circle around yourself and focus on your own part of what’s happening in your marriage,” Rachel says. “So often in marriages—and definitely in ours—one person is constantly looking at the other person and saying, ‘Here’s how you don’t understand me’ and ‘Here’s what I need.’ It was huge for each of us to start by working on what was inside our own circle.”

“A big lesson for me,” Nick says, “was that ‘my wife is not my enemy.’ When I want to go on a bike ride and Rachel says, ‘Well, I thought you’d do this or that with the kids,’ it’s not because she’s my enemy and doesn’t want me to be healthy or to be able to do something I love.

“She has a good heart. She wants me to have these kinds of outlets. But we weren’t communicating as well as we needed to about things like that.

“You think you know your wife after twenty years of marriage, but to understand her the way I do now—how she thinks, what her thought process is, how she’s feeling—that resolves a lot of issues before they even start.

One of the biggest values Nick and Rachel see in re|engage is the way it has given them a foundation for how to have a good marriage.

“You don’t learn about it in high school or college,” Nick says, “but being a good husband or wife is probably one of the most important things you’ll do in your life. That training is what we got at re|engage. And it’s why our group kept meeting to go through it all again. You want to get better and better at it. That first time through, we just scratched the surface.”

Nick and Rachel are effusive when they talk about all the ways their marriage has changed and is changing. Since they first walked into re|engage seeking healing for their marriage, they have become zealous ambassadors for what the program has to offer. Many Monday evenings, you’ll find them hosting the newcomers group, introducing those who have come for the first time to what re|engage has to offer.

“I don’t think there’s any couple,” Nick says, “who wouldn’t benefit from re|engage. People like us come because they need significant help. They need someone to pull them out of whatever place they are in. But in my opinion, there’s nothing about what you learn through re|engage that is irrelevant to any married couple.”

“It makes you a team,” Rachel adds. “It allows you to be what I think God intended you to be—helpmates to each other and, really, a united front.

“We’re not on opposite sides of a boxing ring anymore,” she says.

That doesn’t mean they never disagree about important decisions, “but,” she explains, “we are going through it together. We are seeking God’s will together, and that has been my prayer from the start.”

Parenting
Back to All Stories of Hope