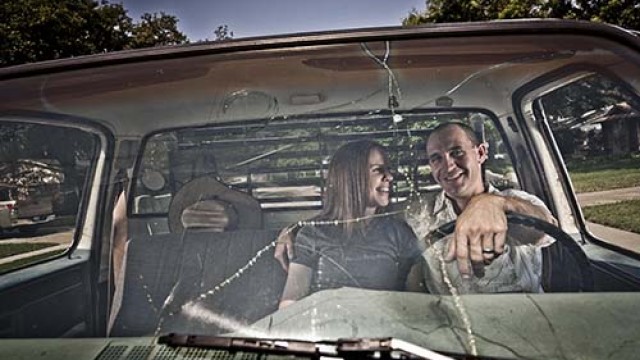 When Mike and Shelly Ahlemeier met in college, their connection was really strong. Mike was interested in Shelly for a long time before they started dating. “I kept checking in with her, and it seemed like she was always dating someone else,” said Mike. “Finally, New Years 1999 came up, and we went out.”

“When we were dating, I was certain I wanted to get married in the Catholic church and bring up our children there,” said Mike. “She didn’t want to do that, and there was a big struggle over what we would do.”

Shelly asked Mike a lot of questions about what he believed, and Mike wrestled with many questions about faith. It was during that time that Mike says God began working deeply in his life. “I had never explored the Bible for myself. I wanted to know who Christ was, and what the Bible had to say about things. I started listening to biblical teaching online and spending time in God’s Word. This was a season of real spiritual growth for me. I decided that since we were both Christ-followers and God had put us together, God could keep us together. I didn’t have to let ‘religion’ pull us apart.”

Married in February 2001, Mike and Shelly say that they had a good marriage, and their drift apart happened very gradually. The root of the problem, Shelly said, is that she’d never really seen a man lead before. “I grew up without a man in the house, and am not someone who is easily swayed by the opinions and beliefs of others,” said Shelly. “It was hard to be submissive to Mike. When he was in paramedic school, Mike was away a lot. I was very self-sufficient, so it was easy to think I didn’t necessarily need him around. That way of thinking became a habit. Eventually, we were losing our connection.”

Mike and Shelly thought they were satisfied with the status quo, at least until the summer of 2010, when Shelly’s young niece died. In the empty days after her niece’s death, Shelly was grief-stricken. Although she could have talked to Mike about her sadness, she felt very alone. “My pride would now allow me to go to Mike for comfort. We were unable to talk about things like that. We each had our own roles, and we were playing them out separately. When tragedy hit, we didn’t know how to deal with it together.” Looking back, Mike says at the time, they were more like roommates than a married couple. “I wasn’t being proactive in our marriage,” said Mike. I dealt with problems as they came up. I didn’t do a lot to help her feel loved. God began opening my eyes to her need to feel loved and pursued again.”

One of the tools God used to help reconnect Mike and Shelly was their move from Royse City, Texas to Dallas. They went from a small church to a larger church environment at Watermark Community Church. Though the transition was challenging, the biblical community they discovered with other believers was a real help to their family and marriage. Relationships with other couples served as a mirror exposing the patterns and issues that were separating Mike and Shelly. With encouragement and support from their community of friends, Mike and Shelly began to take steps to bridge the gap between them.

Mike and Shelly went through re|engage marriage enrichment ministry. Through the teaching and the relationships they built at re|engage, they began to see patterns that were consistently creating conflict. “I realized that I was finding my value in Shelly,” said Mike. “If she was mad at me, it felt like the end of the world. If she rejected me, I felt like a failure. I discovered the importance of finding my identity is in Christ.”

“I learned that Mike needs words of encouragement,” said Shelly. “I was very critical, and didn’t realize how much that was ‘pulling the rug out from under him,’ so to speak. I learned a lot about communicating in a way that wasn’t blaming him or critical. I spent a lot of time in Ephesians 4:29-32, thinking about how I could not let any ‘unwholesome word’ come out of my mouth. The Lord began to transform my thought process.” When we finished Re|Engage, I shared with the group that I felt like God had given me my best friend back. We were on the same page again.”

“Today, I feel like Shelly truly is my partner,” said Mike. “I hadn’t really felt like that since we were first together. We’re no longer a one-man show. We laugh, which is something that had been gone for a long time. Now we’re back. We’re a team. We are truly together again.”

Communication
Back to All Stories of Hope